How To Play Checkers Like A Pro – History, Rules And Strategies

Checkers is one the most popular and fun board games in history as it has captured the minds and hearts of board game enthusiasts around the world for centuries. It appears easy, but despite its simplicity, Checkers is as entertaining as other classic board games such as chess or backgammon, and it requires just as much skill and cunning. Looking at the board and the pieces of Checkers, it looks like a kid’s game, and while it can be hard learning how to play Checkers like a pro, it's easy to pick up the basic gist of the game in just a few minutes.

What Is The Game Of Checkers?

The present-day American version of Checkers is a board game that is more widely known throughout the world as the game Draughts. It's a strategy game that two people play on a board with 64 checkered squares, and each player begins with 24 pieces, called Checkers. The goal is to capture your opponent's Checkers by performing a series of strategic moves guided by the rules of the game. Though it appears simple, Checkers a complex game that requires focused attention and a strategic mindset.

Players can move one checker piece forward and diagonally to an adjacent square. If the square is occupied by the opponent’s piece, it may be “captured” by jumping over it to the unoccupied square directly behind it in the diagonal row, as long as it's not occupied by a checker from either player.  When one player can no longer move his or her checker pieces, they lose the game, and his or her opponent, therefore, is the winner.

A History Of Checkers

The earliest Checkers-like game board was discovered in Mesopotamia (present-day Iraq) by archeologists, and the artifact is thought to be more than 5,000 years old. According to historians, the first version of Checkers was called Alquerque; an Egyptian Checkers game popular until the Middle Ages. Alquerque uses a five-square by five-square board and has similar jumping moves than today’s Checkers.

As time passed, different versions of the game have appeared around the world. For example, American Checkers uses a 64-square board, while most of Europe uses a 100-square board, and the rules of Checkers can vary from country to country, but the essence of the game, or main rules, have remained the same for some time.

Checkers is a game of mathematical possibilities; therefore, as with the game of Chess, it has fascinated computer programmers. The first computer program designed to play Checkers was built in 1952 by Arthur L. Samuel, many other computer programs followed, and nowadays computer checker games are so advanced they can defeat the best players. Computer games have increased Checkers' popularity, and it's now played all over the world for both leisure and as a sport. It requires great concentration, and it is a healthy activity that's beneficial for your brain and peace of mind.

Checkers is a game for everyone; some play it for fun while others play it as a competitive sport in tournaments held all over the world. Anyone can learn to play this simple game but to master the game and play Checkers like a pro can be difficult.  Once you know the basics of the game, you can learn how to play Checkers on your own or with a partner. There are books about how to learn to play Checkers, including different strategies and moves, but it's best to start with the basics.

Checkers can be played anywhere with a flat surface. It is a two-person game in which each player gets 12 Checkers, typically a black set and a red or white set of pieces. The U.S. Checkers board size is the same as in chess; it has 64 alternating dark and light squares that alternate between light and dark colors, typically black and white or black and red.

To set up a game, each player places his 12 discs on the dark squares closest to him, taking up three rows. Once the board is ready, the players alternate making moves across the board. The goal of Checkers is to capture as many pieces as possible to defeat your opponent and win. By capturing all the other player’s Checkers — without getting all of yours captured in the — or by blocking him/her and leaving him/her with no legal moves, you win the game.

Now, let’s learn how to play Checkers. Get a Checkers board, if you don’t have a physical one, no worries you can use your computer and find a game of checkers online. Computers are great to practice and learn the rules of the game.

The goal of the game of Checkers is to leave your opponent with no legal moves; this can happen by capturing all of your opponent's pieces or trapping them on the board squares where they cannot move, that will mean they are blocked. In all versions of modern Checkers, the rules for starting a game are the same: The darker color moves first. You can go first or let your opponent start the game as there is no set rule for who goes first. Once you've decided who moves first, it's time to figure out how to move. There are two types of moves. 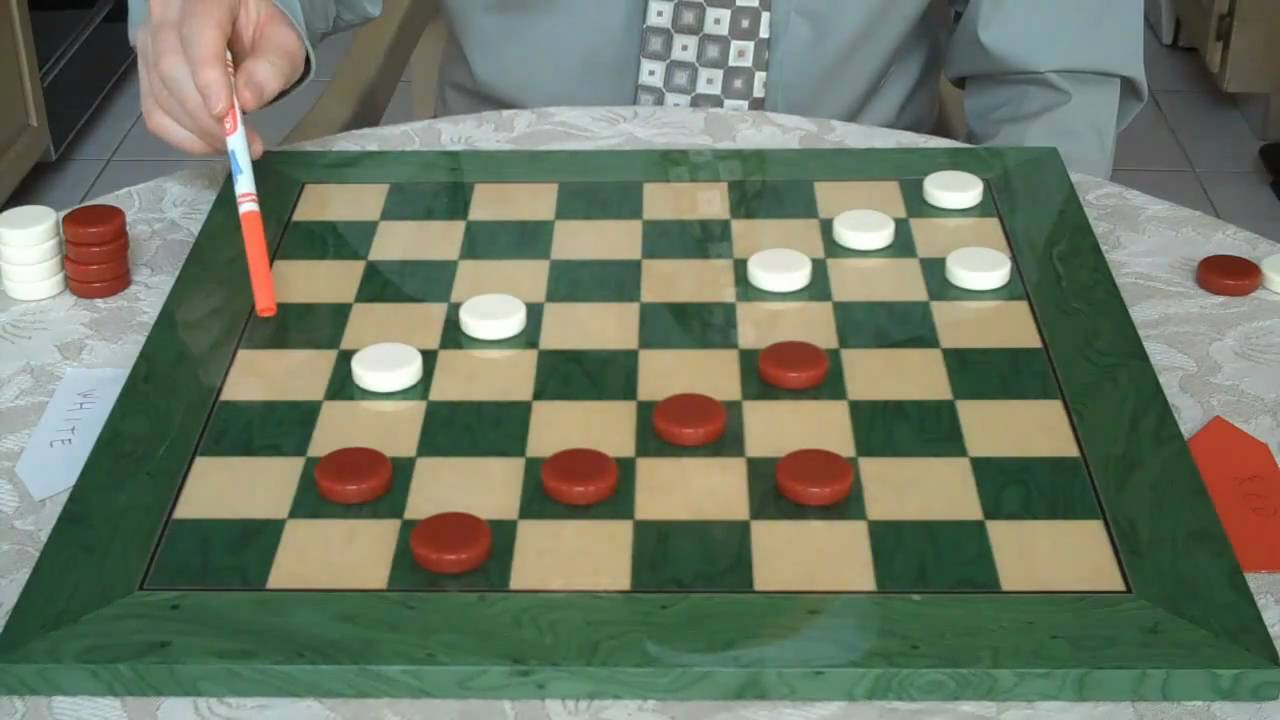 When you move of your Checkers to the opposite end of the board (often called the "crown head" or "kings row"), that piece becomes a "king" piece. It still moves like regular pieces, but it can move backward as well, giving you a great strategic advantage. Players who reach the "kings row" with one of their pieces often say "king me" to denote that piece's ability to move in either direction.

Checkers rules are straightforward, but what has drawn players from all over the world to the game is its strategy. Once you master the basics, you are ready to take your game to the next level. Checkers is more complex than it looks, there are many strategies and play styles to consider. By learning various strategies, you'll have a big advantage over first-time or amateur players.

1. The basic moves require a player to capture an opponent's piece if able, and you can sacrifice some of your pieces to gain an advantage. Envision what the board would look like if your opponent captures a particular piece and decide if it is worth the sacrifice. Does it open a pathway for some of your other pieces to reach the king row? Sometimes the sacrifice is worth it, other times it isn't. It's up to you to make that decision.

3. You can divide your pieces into two groups, 6 pieces on one side of the board and the other 6 on the other side, then determine what pieces you move at different times in the game. Move the pieces in the first group at the start of the game and occasionally move a piece from the second group. When you trade pieces with your opponent, trade A pieces over B pieces as often as possible. As the game progresses, your opponent will probably focus on your first group. Move the other pieces in groups, with your opponent weakened you are in a good position to reach the crowning line.

Now that you've learned how to play Checkers like a pro, you can go enjoy this great game with more advanced players, and who knows, you might even become a champion at a Checkers tournament. The game of Checkers is here to stay, so take out your board or turn on your computer and play this simple game of strategy like a pro.